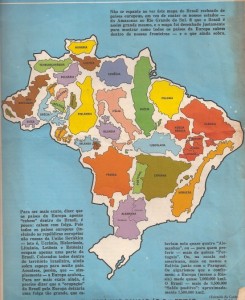 ‘Brazilian’ is ascending and Lisbon is not amused

When leading Lusophone linguists convene in Lisbon later this month, their goal will be to return the language of Portugal to the dominance it last enjoyed about 500 years ago, when the tiny European kingdom controlled colonies throughout the known world

The Conference on Portuguese as a Language in the World System will enlist experts to draft an “action plan for internationalization” of Portuguese. But in fact, Portuguese is doing just fine, internationally: The number of speakers is soaring. That ought to be heralded as good news in Lisbon, and yet the ascendance of Portuguese – this particular Portuguese – is causing a certain disquiet in the former colonial power.

The reason? Brazil. This country’s economic and political rise has given a once-fading Old World language new life, but on its own terms. Classes in “Brazilian Portuguese” in North America and Europe are packed with oil and mining executives, jewellers and retailers who need to be able to buy and sell in Rio de Janeiro and Sao Paulo. With Brazil’s surging middle-class travelling internationally, tourist destinations are rushing to bring in guides and texts to woo them in their own language. Writers from Brazil – 70 of them – were featured at this year’s Frankfurt Book Fair, the publishing world’s premiere event.

And just this week, the popular website Buzzfeed announced it was launching new international versions in French, Spanish and Portuguese, with the latter geared toward a Brazilian audience.

Portuguese is now the world’s sixth-most spoken language, with close to 240 million users worldwide. And it is Brazil’s version, which has some significant differences from the European one in grammar and vocabulary, that is spreading. When people speaking Portuguese from Portugal appear on television here, they are frequently subtitled in “Brazilian.”

“There are 200 million of us, and not even 11 million of them [in Portugal],” says Tania de Souza Bastos, a Portuguese teacher and linguaphile in Rio. “It only makes sense that ours will be the world’s Portuguese. They have no choice.”

This bit of realpolitik is understood, if not relished, in Lisbon.

“In Portugal, it’s obvious that people don’t feel very good that they are adopting the Brazilian norm, in most cases,” says João Vincente Faustino, a scholar with Portugal’s Instituto Camões (which promotes Portuguese globally) who is now a visiting lecturer on Portuguese at the University of Toronto. “In the background, you have the issue of, Are we being dominated by Brazil?”

Brazil’s linguistic clout was first felt in 1990, when diplomats from Lusophone countries held a summit to discuss that highly charged foreign policy matter, spelling. Brazil bullied the Lusophone countries into signing the Acordo Ortográfico – a treaty on how Portuguese words would be spelled.

The new rules in large part reflected Brazilian usage. The accord was signed that year and finally implemented in 2009; countries had three years to make sure the new rules were used in all textbooks and other published materials.

“There are people who say, We are losing our cultural and linguistic memory, that it’s offensive to our cultural history,” Mr. Faustino said.

There is also irritation in academic and publishing circles that Portugal has, as per the accord, already implemented the new rules, at considerable trouble and expense, while Brazil, which wanted them in the first place, has yet to do so. Last year, Brazilian President Dilma Rousseff arbitrarily declared her country had another four years to make the changes.

At the same time, Mr. Faustino noted that the economic crisis and the country’s 17-per-cent unemployment are the main topics of conversation in Portugal today, and few people have the luxury of worrying about the placement of pronouns.

Brazilian Portuguese reflects the fact that, until a few years ago, this markedly unequal country had no middle class, only “landlords or slaves,” as the local expression goes. Its language consequently has a tenor many consider more polite than the European incarnation.

“The Portuguese of Portugal is perceived here as muito duro – very hard,” Ms. Bastos said. “To us they sound aggressive and humiliating.”

In Brazil, there is widespread use of a deferential, third-person declension that originates in the country’s grim past. It was unacceptable for slaves and plantation workers to address the “master” in the imperative or the second-person singular, so a form of grammar in which pronouns and cases differ from the colonizer’s language evolved. Because the slaves far outnumbered the masters, this became the dominant idiom.

Spanish, spoken in 21 countries across a broad swath of territory, has taken a somewhat more flexible approach, with multiple “standardized” versions. There is one for Spain, another for the south of Latin America, and a largely Mexican influenced one for Central America and the north of Latin America.

Then there is a fourth version, synthesizing all of these, used by organizations such as the United Nations. Through its Instituto Cervantes, the Spanish government attempts to promote its (grammatically rigid) Spanish throughout the world, but the dynamism of Latin American language has influenced what is spoken in Spain.

In Portugal today, the government is trying to sell the changes in spelling to which it agreed in the Acordo Ortográfico to its citizens with the argument that the standardization will simplify the global promotion of Portuguese – but Prof. Faustino noted that English does just fine without standardization.

“Portuguese will become more relevant on the world stage because Brazil is an economic and cultural superpower – but that will happen organically, it doesn’t depend on these issues of unified spelling,” he said.

Luiz Carlos Cagliari, a linguistics professor and expert on orthography in Sao Paulo, says the spelling treaty was unnecessary, since all it did was inflame tensions, and sooner or later everyone would have been using Brazil’s spellings anyway.

“The rise of Brazilian Portuguese is long overdue, he said. “We must be heard and viewed as an important nation.”

At the Museum of the Portuguese Language in Sao Paulo, visitors learn about the many roots of Brazilian Portuguese. These include African languages and the dozens spoken by Brazil’s indigenous people, which have influenced the Portuguese of this country.

But there are Italian, Japanese, Arabic and other influences, too. And that, said museum educator Camila Marques, is what makes Brazil’s Portuguese so special: It’s already a world language.

“Everyone can see how they have influenced Brazil and our language,” Ms. Marques said. “Everybody has a piece of themselves here.”

What else is different?

The influence of African and indigenous languages. The Brazilian word for one’s posterior, for example, is the African-derived bunda, or for a child’s, bumbum, pronounced boom-boom. In Portugal, they use cu – which is considered unspeakably rude in Brazil.