I’ve been known to say that silent letters are stories waiting to be told, but this is a story about silent letters. This past March, I received a message in my personal Facebook inbox asking me this: 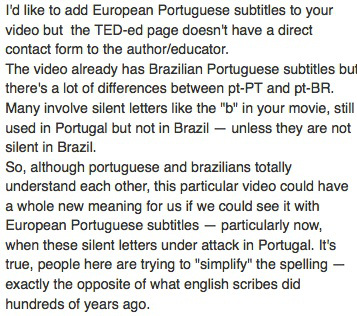 Needless to say, I was interested. Not only did I respond to my inquirer, Rui; I responded in rusty Portuguese:

of course, it should’ve said entre duas línguas. I said it was rusty.

Rui was delighted, and we agreed that I would be able to read and approve the subtitles. He gave me a brief(ish) history of orthographic reform in Portugal and Brazil, and explained that having this video — about a “silent” letter — subtitled into continental Portuguese, was particularly important to the ILC — Iniciativa Legislativa de Cidadãos, an informal group of citizens without any kind of political or religious affiliation, currently trying to gather 35,000 signatures to take political action to halt the movement of orthographic reform within Portugal.
Rui has a lot of passion for orthography, including the places where it is deep. He deserves all the credit for untangling TED’s red tape and getting all the permissions through. He faced an uphill battle because the Brazilian subtitles had already been published, but he kept at it even while working in Africa with limited Internet access.
I am pleased to announce that after three months of hard work, interhemispheric communication, fine-tuning translated idioms, and Rui’s relentless follow-up, the Portuguese-from-Portugal subtitles are now available in the captioning options of the TED-Ed video.
And he did it all with good cheer:

Of course, I don’t expect all of my readers will hie to the video to watch it with Portuguese and/or Brazilian subtitles, but that’s exactly what I did. Here’s a snippet of each, with an important difference: 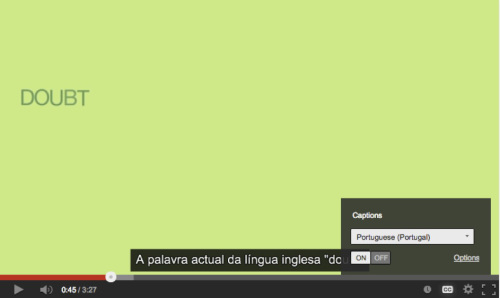 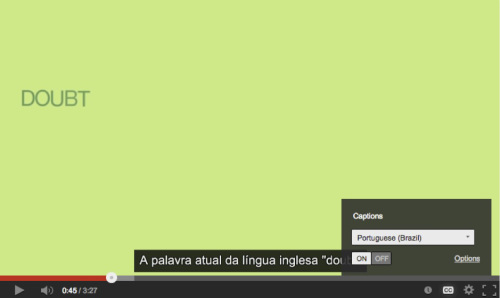 Congratulations to Rui and the team of translators who achieved a happy ending for this story.